In 2030, 80% of Ireland’s electricity should come from renewable sources. This will require a significant level of investment, stakeholder engagement and a proven ability to deliver large-scale infrastructure projects. Energia Group has a long and proven history in Ireland’s renewable electricity transition and to date has invested over €1 billion across the island of Ireland. By 2030, the Group’s expected level of overall investment will be €4 billion. This ambition will facilitate the achievement of Ireland’s climate action targets and result in a more sustainable energy system, economy and society for all.

Offshore wind represents a huge opportunity for Ireland to take advantage of an accelerated decarbonisation pathway. It can underpin the wider decarbonisation of heat and transport. Projects that can deliver renewable electricity for 2030 must be prioritised if Ireland is to achieve the wider climate ambitions and remain within new sectoral carbon budgets for 2030 and beyond. The challenges to 2030 delivery are numerous and substantial, and it will require a significant change in pace and approach from all involved, including Government and government agencies, if this is to be achieved. However, the cost of not doing this now with all projects that can reasonably deliver for 2030 is arguably far greater for the environment and biodiversity. 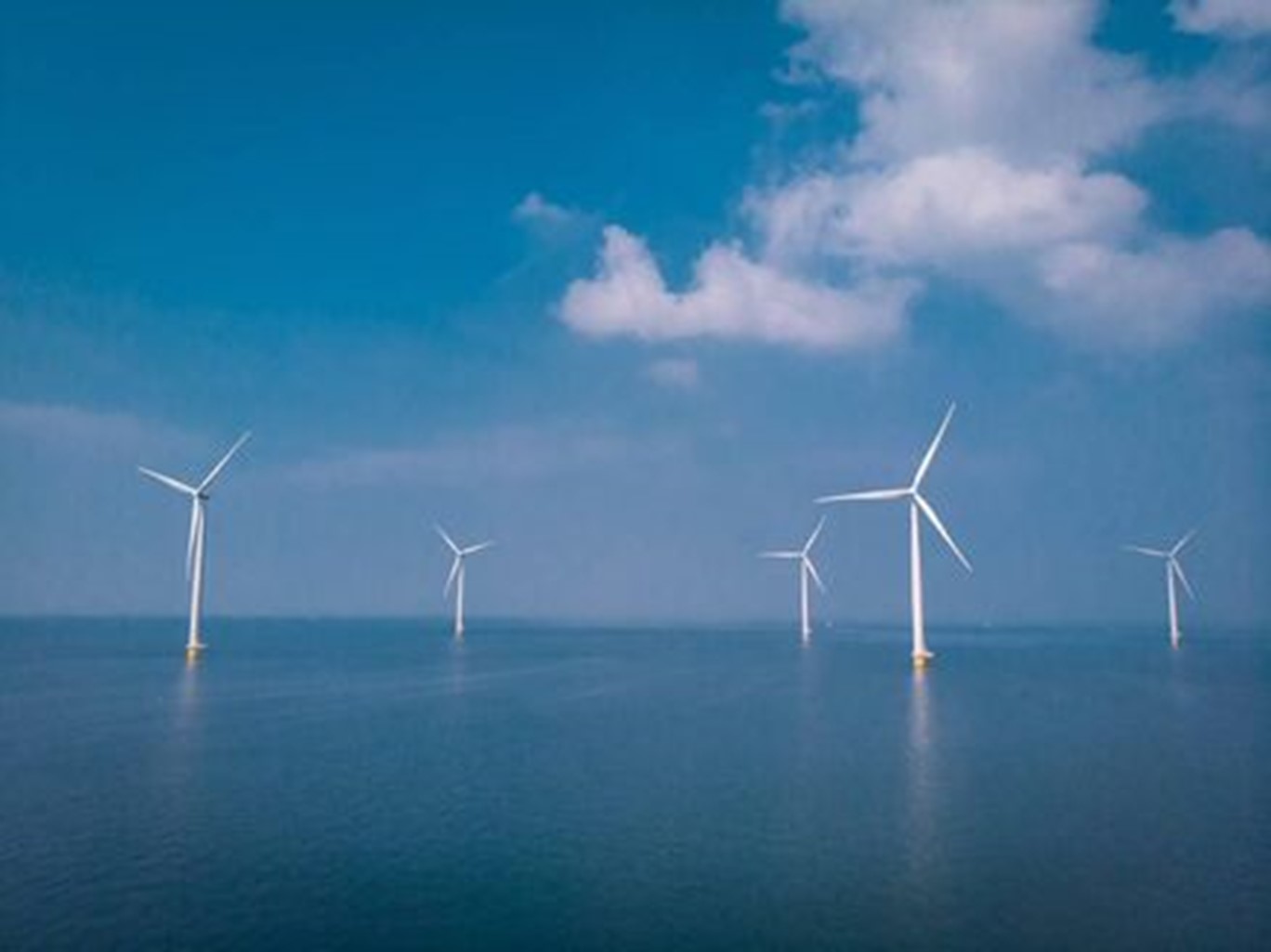 80% of Ireland's electricity should come from renewable sources by 2030.

With over 20 years’ experience in the Irish energy market, Energia Group currently supplies approximately 20% of the island of Ireland’s total electricity requirements and is responsible for approximately 25% of wind power capacity installed on the island. The Group supplies over 820,000 homes and businesses across the island of Ireland with electricity and gas and is continuing to make progress on its €3 billion Positive Energy investment programme, focused on renewable energy projects. Ongoing projects include onshore and offshore wind, solar, battery storage and green hydrogen. It is anticipated that Energia’s programme will add approximately 1.5 GW of additional renewable capacity to the system by 2030 to facilitate the achievement of Government targets and maintain momentum towards the overall objective of Net Zero.

“At Energia Group we are committed to playing a leading role in the decarbonisation of the energy system across the island of Ireland. We are delighted to be making continued progress on the development of two significant offshore renewable energy projects, the North Celtic Sea and the South Irish Sea. The projects form part of a multi-billion euro portfolio of investments by Energia as part of the company’s Positive Energy Programme for Ireland, creating jobs and economic benefit for coastal communities, and clean, green electricity on an ongoing basis into the future.

Energia’s offshore wind projects can make a major contribution not just to Ireland’s offshore wind targets but also to the decarbonisation of the economy and the requirement to halve our Greenhouse Gas emissions by 2030. Combined, Energia’s North Celtic Sea and South Irish Sea projects could provide up to 1,600MW of renewable offshore wind power capable of generating enough green electricity to power over 1 million homes and avoid more than 2 million tonnes of carbon emissions.” 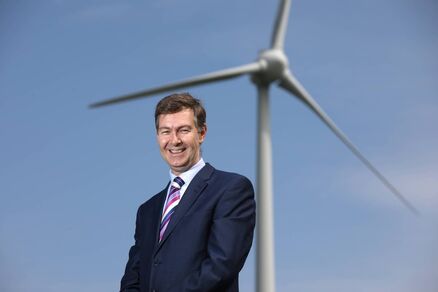 "There is a national demand for renewable energy — be it offshore, solar, or other, that we are committed to," says Mr. Baillie.

As a responsible business with extensive experience of building large scale renewable projects in Ireland, Energia understands the importance of regular communication and consultation with local stakeholders and is committed to this throughout the lifetime of the projects. Earlier this year, the Group published the Introductory Phase Public Consultation Reports for both projects. Across the two introductory public consultations, there were over 11,700 views of the dedicated project websites and 1,840 visits to the project virtual consultation rooms, culminating in a total of 167 submissions. Energia is committed to ongoing engagement with local communities as the North Celtic Sea and South Irish Sea projects progress.

Of course, coastal communities will be particularly impacted by climate change as sea levels rise and storms become increasingly common. Impacted by climate change, these communities will play a pivotal part in tackling the climate crisis. Ireland’s Climate Action Plan sets out an increase in the provision of clean, affordable, and reliable energy generated from offshore wind to at least 5GW. Development of these projects, from initial site selection to the export of electricity to the grid, can last up to 10 years and will require significant investment from the energy sector and assistance from government to meet this ambitious target.

Energia Group is currently undertaking site investigation surveys for both the North Celtic Sea, and South Irish Sea projects which would be located between 10km and up to 25km off Ireland’s southeast and east coast respectively. These surveys will provide important information on the seabed conditions including, water depth, sediment type and habitat distribution. This data all helps to determine the proposed size and design of the wind farm, its location, the number of turbines and the distance from shore. All surveys are carried out with respect for the marine environment, for fisheries and for the coastal communities at the core of these projects.

Speaking about the progression of the offshore projects and the surveys, Mr Baillie said:

“The surveys we have carried out to date along with our ongoing public consultations are the first steps in projects which we hope to have operational just in time for 2030 to meet the Government’s generation target for offshore wind. North Celtic Sea and South Irish Sea are two of a small number of other offshore projects which can realistically meet the timelines to the achievement of these goals, so it is essential that they be supported by the government through legislation and a clear, timely planning and consenting regime to make the development pathway as smooth as possible. There is a national demand for renewable energy – be it offshore, solar, or other, that we are committed to, but we need support to do so.” 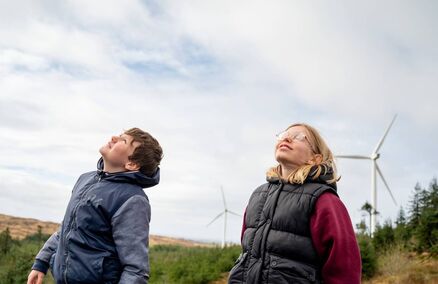 Through their scholarship grants, Energia are committed to educating future generations and nurturing a talent pool that will help create a more sustainable Ireland.

Offshore wind provides an opportunity for Ireland to make a meaningful contribution to both the national and global efforts towards decarbonising the energy system through both reduction of emissions from electricity and by enabling the electrification of other sectors such as transport and heat to reduce emissions in those sectors too. Currently, the production and use of energy account for more than 75% of the EU’s greenhouse gas emissions, which is why developing the full potential of Europe’s offshore wind energy is a key target of the European Green Deal (EU).

According to recent Sustainable Energy Authority Ireland (SEAI) figures approximately 42% of all electricity produced in Ireland is from renewable sources while 86% of this renewable electricity came from wind. Harnessing coastal winds provides a clean and natural energy source without emitting any greenhouse gases. Favourable wind speeds and sea conditions in Ireland make it an ideal environment for generating green electricity offshore.

As well as reducing carbon emissions, offshore wind will create new economic opportunities, support regional development, and drive sustainable and inclusive growth. Economic activity will be boosted by the creation of thousands of long-term employment opportunities across the country. The development of just one windfarm will create 800 construction jobs and nearly 100 local operational and maintenance jobs, as well as wider supply chain opportunities for local businesses.

“Our ambitious projects will be beneficial not only to the Irish environment and to achieving our overall climate action goals, but also to the coastal communities, through the creation of new marine-based employment opportunities and through the knock-on impacts of that to the wider economy. Each offshore project will support the employment of nearly a thousand people in the construction phase and approximately 100 long-term jobs. This activity will support businesses in these areas creating a positive boost for the entire local economy”, said Mr. Baillie. 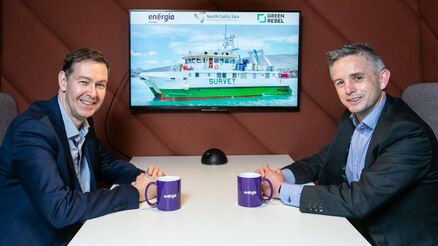 Energia Group has a long-standing record of working in collaboration with the local communities in which they operate. In the last six years, the company has invested more than €3 million through their community benefit funds, supporting groups such as sports clubs, and community associations as well as providing scholarship grants for third level students.

“Our funds are all about showing the communities where we operate the tangible benefits of renewable energy and making a positive impact on them. Given our extensive experience of building large scale renewable projects, we know just how important it is to maintain regular communication and consultation with local stakeholders and we are committed to this throughout the lifetime of all of our projects. We want to work with the communities to support sustainability in these towns and villages across the island of Ireland from an environmental and a social perspective.”